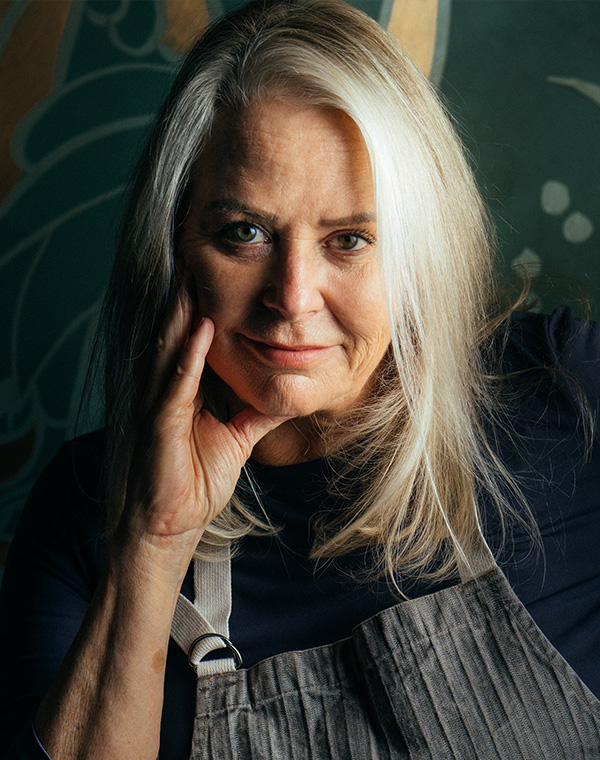 Growing up in Northern California, Nancy Oakes has worked in the front of house and as a chef in San Francisco for her entire career. In 1988 Chef Oakes opened
L’Avenue to acclaim, and it was at this time that her unique food philosophy and execution took shape. By the time Boulevard opened its Art Nouveau doors in 1993,
her pioneering and creative vision was clear. Oakes’ kitchen is a celebration of the California producer: supporting the best purveyors and illustrating the beauty of their food on every plate. Oakes’ cuisine marries the best local elements effortlessly with their foreign counterpart or ancestor cuisines from Europe and Asia. These multiple elements and influences are reigned in by Oakes’ knowledge and use of classic and uncompromising French technique. The result: meals that are creative, memorable, and delicious.

A pioneering American chef, and a mentor to many chefs in the last decades, many credit Oakes for her generosity, consistency and vision. She is a student of other
cultures and cuisines, a champion of artisans, and has hospitality in her bones. Oakes has worked in many restaurant positions and the front and back of house, and runs her own restaurant with the kindness, clearness and confidence of a chef owner who knows all aspects of the restaurant. Oakes has a natural understanding of her
customers, and their needs and hopes as people.

Boulevard has been a loved classic for 28 years. Over this time, the restaurant has received numerous local, national and international accolades, nominations and
awards; among them, The James Beard Foundation Award for Best Chef in California 2001 and Outstanding Restaurant in the United States 2012, as well as the Filiale des Etats-Unis in France.

Chef Oakes co-wrote Boulevard: The Cookbook with Pam Mazzola in 2005 which was nominated for awards from both the James Beard Foundation and the International Association of Culinary Professionals.

In 2010, Chef Oakes opened Prospect Restaurant with Pam Mazzola and Kathy King in San Francisco’s flourishing South of Market/Embarcadero neighborhood. Located at the base of the Infinity Towers, it is a warm and modern urban environment, with high service standards and exceptional cuisine.

Chef Oakes’ energy and sense of community are reflected in the time and talent she has devoted to cooking for charitable organizations. In addition to serving on the
Board of Directors for Meals on Wheels of San Francisco, she has been Gala Chef Chair for the organization’s annual fundraiser for 12 years. She enjoys continuous
involvement with numerous other philanthropies, including Share Our Strength, The San Francisco Food Bank, The Center for Urban Education about Sustainable
Agriculture, Make-a-Wish Foundation, Auction Napa Valley, Alex’s Lemonade, and Maitri Compassionate Care.