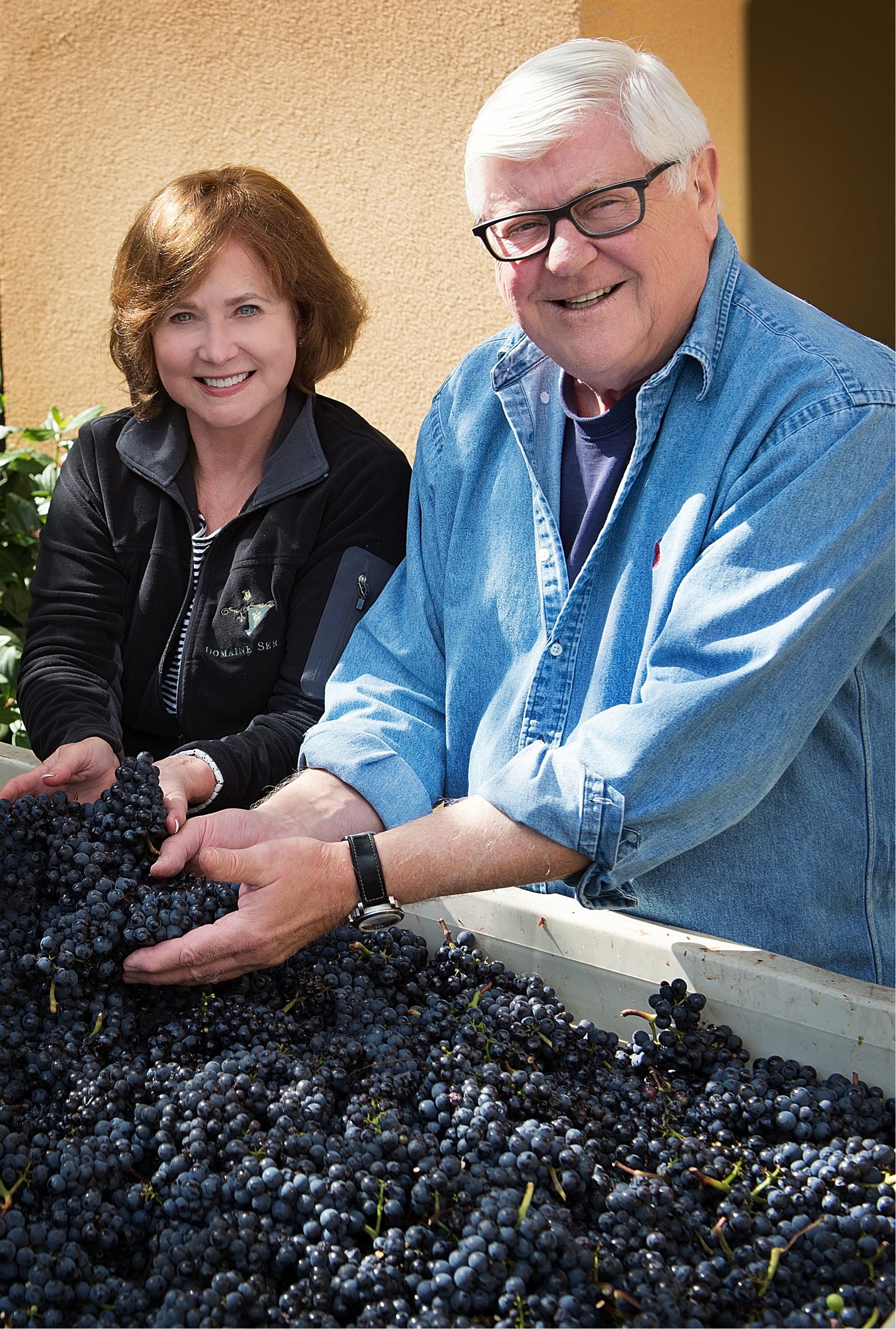 Please join us in welcoming this famous wine couple back for the 2016 Naples Winter Wine Festival!
Grace Bradford Evenstad and Ken Evenstad founded Domaine Serene in 1989 within the Dundee Hills in Northern Willamette Valley, Oregon. Today, the husband and wife duo produce some of the world’s best Pinot Noir and Chardonnay. Domaine Serene is a topline facility that uses sustainable and environmentally friendly farming practices. Currently, their winery business consists of five vineyard estates and more than 700 acres, 275 of which are planted to vines. Whether as guests or festival chairs, The Naples Winter Wine Festival continues to be a big part of the Evenstad’s life, as they’ve participated in our Festival each year, starting with our inception in 2001. Read on to discover how Grace and Ken got started in the wine industry, what their proudest accomplishment is and more.

What was your first job in the wine industry?
GBE & KE: We bought land in Oregon in 1989, which had just been logged to plant a vineyard. We had no experience in the wine business. But for 20 years, we had a lot of interest and a desire to have our own winery. We both started at the top, as founders of a winery and vineyards. That being said, as founders we worked like harvest interns; harvesting, sorting fruit, shepherding fermentations, barreling down, racking, blending, bottling by hand, labeling by hand, and then selling the wines. We jumped in and did it all, and learned so much! After 26 years, we’re both very involved in every aspect of the business, although we don’t do hand bottling, corking, capsuling and labeling anymore.

How many years have you participated in the Naples Winter Wine Festival? Do you have a favorite moment from these past years?
GBE & KE: We attended the first year as guests of Penny and Lee Anderson. We have been involved ever since as Trustees. We have hosted or co-hosted a Vintner Dinner almost every year.
GBE: My most memorable moment was in 2006, the year I was the Chair of the Festival, when Emeril Lagasse participated for the first time. We had talked previously because he was starting his own foundation’s festival, called Carnivale du Vin, to help children in New Orleans. He wanted Domaine Serene to help, so we agreed to help each other. Then Hurricane Katrina hit New Orleans in August 2006. I couldn’t believe that after the devastation of losing three restaurants and two homes Emeril still came to the Naples Winter Wine Festival the following January. We wanted to celebrate New Orleans, hoping it would one day come back, so we hired a local New Orleans band that had been together since the 70’s. Little did we know when they came to our house in Naples that they had not seen each other since they’d all fled from New Orleans in August. It was a fabulous, happy reunion for all! And we raised more than $13 million for the kids of Collier County that year.

If you could share a bottle of wine with one person, dead or alive, who would it be and why?
GBE: Well, in this life it would always be my husband Ken. But if I could go back in history it would be Thomas Jefferson, who was a brilliant and wise man. He was key to founding our constitution and country. He was a farmer at heart, and he brought the first vines to America from France. He grew wine grapes and made wine in Virginia. I’m sure if he knew of Oregon he would have planted there, but west of the Mississippi was unknown at the time.

What is your proudest accomplishment?
GBE: In my personal life it would be my wonderful children, Serene (our winery is named after her) and Mark (the Mark Bradford vineyard is named after him.) Both of them are just wonderful people, great citizens, parents and entrepreneurs.
KE: In my business life it would be a blind wine tasting of Domaine Serene and Domaine de la Romanée-Conti, which are widely recognized as the best wines in the world. It happened in 2004. There were 37 sommelier tasters, as well as wine buyers for restaurants and retail shops around the U.S. No one was from Oregon. There were three Domaine Serene wines, three Domaine de la Romanée-Conti wines, and three vintages; 1998, 1999 and 2000. Domaine Serene won first, second and third place in 1998 and 1999! We also won first, second and sixth in 2000. Everyone, especially us, was surprised. It was very exciting to know we were on the same table with the best Pinot Noir in the world.

What is your preference, wine with food or wine on its own?
GBE: It depends if I’m hungry!

What’s your favorite thing to do in Naples, Florida?
GBE & KE: We like to spend time with wonderful friends, especially over lunch or dinner.