Dental caries (tooth decay) is among the most common chronic childhood diseases, ahead of asthma and hay fever. Oral health care is the most prevalent unmet children’s health need especially in low-income, minority, and rural communities. Dental caries is also characterized by profound disparities; children from families living below the Federal Poverty Line have twice the prevalence of dental caries than higher income children, with greater extent and severity of decay and a greater likelihood their disease will remain untreated.

While oral health faces challenges throughout the United States, the problem is perhaps most challenging in Florida. Florida was one of just three states receiving a ‘F’ grade in two consecutive Oral Health Report Cards issued by the Pew Center on the States. The grade was largely due to extremely low Medicaid reimbursement rates, the nation’s lowest dental care utilization by Medicaid recipients, the lack of an oral health surveillance system, and one of the nation’s most restrictive state practice acts on dental hygienists’ ability to independently provide preventive services. In addition, more than 20% of Florida’s population lives in designated Dental Health Professional Shortage Areas. The number of dentists needed to remove the shortage designation (1,320) is higher than any other state and accounts for 13.36% of the total number of dentists estimated for the entire country (10,716).

While not often thought of as a health crisis, severe medical complications resulting from minimal oral care and treatment can be extremely dangerous, or even fatal. 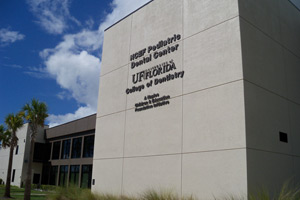 NCEF’s Contribution to the Solution:

Oral Health was the first NCEF strategic initiative, and its success set the stage for subsequent major collaborations impacting children’s services for decades to come. To address the serious gap in oral health services, NCEF spearheaded a unique public-private partnership to build and maintain the NCEF Pediatric Dental Center at Florida SouthWestern State College in East Naples, which opened in December 2008. The 28,000 square foot state-of-the-art facility was the first LEED certified building constructed in Collier County. The nationally accredited and award-winning Center hosts the University of Florida (UF) College of Dentistry’s pediatric dental residency program – one of the most advanced programs of its kind in the country.

The University of Florida clinicians, faculty, residents and volunteers at the NCEF Pediatric Dental Center all agree—the severity of the dental disease observed at the clinic is like none they have ever seen, particularly the rampant disease in children under the age of five. It is not uncommon for toddlers to require either intravenous sedation or general anesthesia in order to receive the scope of care necessary to improve their oral health. Particularly unsettling is the presence of heightened levels of early childhood caries. Children requiring sedation have their dental procedures performed at Physicians Regional on Collier Blvd., which has all of the appropriate equipment and allows necessary precautions to be taken when anesthesia is required. The collaboration has also identified an increased number of children with disabilities who need sedation in order to perform their dental care. Dental care is the most prevalent unmet health care need for children with special needs. The initiative is on track to be a National Model for improving oral health of children at high-risk for dental disease. Continued research for disease prevention introduced the newest prevention – Silver Diamine Fluoride – to prevent extensive surgery and frequent need for sedation.

With a strategy of community partnerships focused on vulnerable, indigent and special needs populations, the UF College of Dentistry’s Statewide Network for Community Oral Health has become one of the largest providers of low-cost dental care in Florida. It operates 18 other clinics throughout the state and provides nearly all care to Florida’s indigent residents through its network.

Based upon data from Phase I of NCEF’s Oral Health Initiative, a new and innovative five-year program began in 2013. It included the development of Collier County’s first oral health surveillance system, an essential element for public health program planning, evaluation and advocacy. Phase II of NCEF’s Children’s Oral Health Initiative increased the availability of evidence-based preventive services in the area, including expanding a school-based dental sealant program for all second grade children in low socio-economic schools. Working with the Collier County Health Department and local Women, Infant, and Children (WIC) centers, the project provides oral health education for pregnant women and new moms, as well as screening, fluoride varnish application, and referral for at-risk children. To increase the oral health literacy of the families it serves, the Pediatric Dental Center now employs a promotores de salud – – a health educator who comes from the communities served – – delivering culturally appropriate oral health counseling and guidance. Phase II builds on and complements NCEF’s successful investment in Phase I.

The ultimate goal of the NCEF Children’s Oral Health Initiative is to decrease the number of children in our community who suffer from dental disease and improve their oral health-related quality of life. The next phase of the oral health initiative involves refining the evidence-based, community-delivered, and minimally invasive treatments for dental disease to be more efficient and effective. The program recently added Atraumatic Restorative Technique (ART), an evidence-based, minimally invasive approach to restoring cavities in young children. ART has been shown to be highly effective in managing tooth decay in primary (baby) teeth.

By promoting oral health literacy and preventative practices in partnership with community-based organizations throughout the county, initiative partners are working collaboratively to ensure all children and families have access to critical oral health care and reduce the incidence of urgent dental needs