One in five children under the age of 18 has a diagnosable mental health disorder. Early identification, expert diagnosis and effective individual treatment of childhood psychiatric and behavioral disorders are needed, along with taking away the stigma for children and their families, and empowering them with help, hope and answers.

Six separate NCEF-commissioned studies have documented the daunting challenges of mental health care in our community, including lack of access to treatment, insufficient numbers of qualified mental health providers, and inadequate to non-existent coordination among health-care providers.

Mental health and substance abuse have been identified as the two most pressing issues by the chiefs of Collier County’s local law enforcement and emergency response agencies.

Every day 3,000 children in 9th through 12th grade attempt suicide.

Recently, a Collier County Sherriff stated “In America, we have two suicides for every homicide. 5,400 children from 7 to 12 (years of age) attempt suicide every day.  Every day, 580 new users start taking heroin, and 780 die from opioids. One in nine people have addiction issues and only 11 percent of those receive any treatment.”

“In the first four months of 2017, Collier County had 2,700 calls for someone in a mental health crisis that equals one per hour.” Over the same period, there were 3,000 calls relating to substance abuse.

The rate of newborns born physically dependent on drugs they were exposed to in the womb continues to grow in our area and throughout Florida. Infants with neonatal abstinence syndrome must spend weeks or months slowly detoxing in hospitals before they are ready to go home.

According to Naples Community Hospital, over the past five years, 2% of all newborns born at the Birth Place have suffered drug withdrawals. That is more than twice the national average and a 1,046 percent increase over rates a decade ago. In the State of Florida, 338 newborns suffered drug withdrawal in 2005. Ten years later, the number increased dramatically to 2,487.

In relation to the state, 338 Florida newborns suffered drug withdrawal in 2005. Ten years later, the number was 2,487.

As the number of infants exposed to drug withdrawal grows, the increase in developmental and social emotional delays are becoming more prevalent in our early learning environments. Prevention and intervention are crucial to prevent children from following the same path as their parent.

NCEF’s Contribution to the Solution:

Recognizing that the pediatric primary care setting is the main gateway to access care for children and youth, the American Academy of Child and Adolescent Psychiatry (AACAP) and the American Academy of Pediatrics (AAP) have highlighted the need to address the mental health needs of children and adolescents in primary care settings. Based on their research and recommendations, NCEF has brought together key providers in the community to help shift the provision of mental health services in Collier County to an integrated primary care model. Since 2012, the initiative has been transforming and expanding mental and behavioral health care for at-risk children in Collier County. 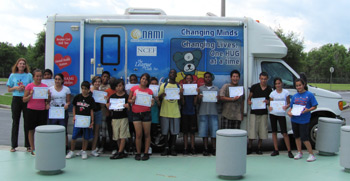 Because of the commitment of the individual initiative partners, each plays an essential and unique role in overall programmatic achievement. Some examples of significant system advances include the pediatric psychopharmacology medication management courses offered to Collier County pediatricians by FSU College of Medicine. Additionally, David Lawrence Centers’ targeted case management program for at-risk children and families in Immokalee has grown dramatically. DLC has hired culturally competent child psychiatric professionals to provide services for hundreds of at-risk children. Compounding the value of these psychiatric services is the weekly provision of consultation with the Healthcare Network of Southwest Florida’s psychologists.

Golisano Children’s Hospital and NCEF partnered in 2014 to develop a workable, sustainable system of care and treatment for the low income and uninsured children with ASD in Collier County.

The Golisano Children’s Hospital Pediatric Specialty Clinic in Naples is home to the Autism Behavior Center (ABC), which includes an Autism Navigator. The Autism Navigator assists families to access a comprehensive network of providers and services for children with ASD in Collier County. The Navigator helps families to implement the Pediatric Neurologist’s plan of care by working with them to set up therapies, deal with insurance companies, and working with other community resources they may need. This has helped to develop a strong collaboration with other community agencies to bring in guest speakers, discuss barriers to care, collaborate on trainings and work to provide the best care to families. Trainings are critical to helping families with newly diagnosed children with ASD gain knowledge and skills from experts in the field of ASD.

Part of the Navigator’s responsibility is to develop a resource inventory to connect a network of providers and services for families of children with ASD in Collier County and identify gaps in services. The gap most often identified is the lack of available Applied Behavior Analysis (ABA) for children with ASD. The Pediatric Specialty Clinic has helped close the gap by providing an increase in the use of ABA to help children with Autism live happy and productive lives.