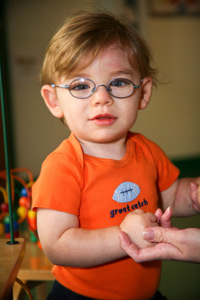 Research indicates that significant vision problems are prevalent in one in four of all school-aged children in the United States and one of the most prevalent handicapping conditions in childhood (Farebee 2004, Zaba 2008). Low-income and minority children are at a greater risk of under-diagnosis and under-treatment of vision problems as well as an unmet need for vision care services (Ganz et al 2006, 2007, Basch 2010). Among Title I students and academically and behaviorally at-risk children, research indicates that up to 85% have vision problems that are either undetected or untreated (Johnson et al 2000, Zaba 2008).

Experts estimate during the first twelve years 80% of what we learn comes through the visual processing of information, yet two out of three children in the United States do not receive any preventative vision care before entering elementary school (Farebee 2004, Zaba 2008). Screening with the traditional Snellen Chart may miss up to 60% of significant refractive error (Indian River Study, 2009).

Prior to NCEF’s Vision Initiative, students in Collier County were only screened for vision issues in grades kindergarten, first, third and sixth grade.

NCEF’s Contribution to a Solution

NCEF conducted a follow up study on child wellbeing in 2015 which addressed the overlapping medical needs for children in Collier County. vision examinations and eyeglasses were shown to be a significant gap in services. Vision Initiative partners established a well-defined baseline of need, and a multiple modality structure to treat the children with the most acute eye care challenges.

Coined “Now You See It®,” this strategic initiative ensures children in Collier County’s Title I schools receive vision screenings by eye professionals. Then, if medically appropriate, children also receive full eye exams and two pairs of eyeglasses – one for home and one for school. When the need for tertiary eye care is detected, as is the case for over 100 children annually, the services of volunteer ophthalmologists are called upon through the Florida Lions Eye Clinic and University of Miami’s Bascom Palmer Eye Institute.

Through this initiative, approximately 20,000 children a year are screened using state of the art instruments, and comprehensive vision exams are provided for those identified with poor vision. Of the nearly 3,000 children given follow-up exams annually, some 2,500 receive two pair of prescription lenses at no cost to the families.

With funding from NCEF, summer camp experiences are offered for children with limited or no sight through Lighthouse of Collier County. Additionally, NCEF and Florida Lions Eye Clinic have purchased Spot Vision Screeners for the majority of the local pediatric offices in our community to integrate ocular care with pediatric visits. The screener is a handheld, portable device designed to help users quickly and easily detect vision issues on children six months of age and older. The Spot screens both eyes at once from a nonthreatening 3-foot distance. This tool has enabled early detection for the diagnosis of Astigmatism, Myopia, Strabismus, Hyperopia, and Anisometropia, and subsequent follow up care that will ultimately save their sight.